In March 1999, a video camera network was established by the German Arbeitskreis Meteore (AKM). Because of its international character, it has been renamed to IMO Video Meteor Network in 2004.

A detailed description of the early network was given in

The data collected by the IMO network is available without restriction to everybody who is investigating meteor showers. All we require is to reference the database properly in every work or publication using our data.

If you wish to join the network or have any question with respect to the database, please, contact the author.

A detailed view of the area covered by the IMO Video Meteor Network can be obtained with Google Earth. A KML-File from the network can be imported to show the area covered by the individual cameras at an altitude of 100 km. The following two screen shots show all cameras in central Europe, in America and a particular pair of cameras in south Germany. By analysing the geometry of individual cameras it is possible to adjust the camera fields for double station recordings. 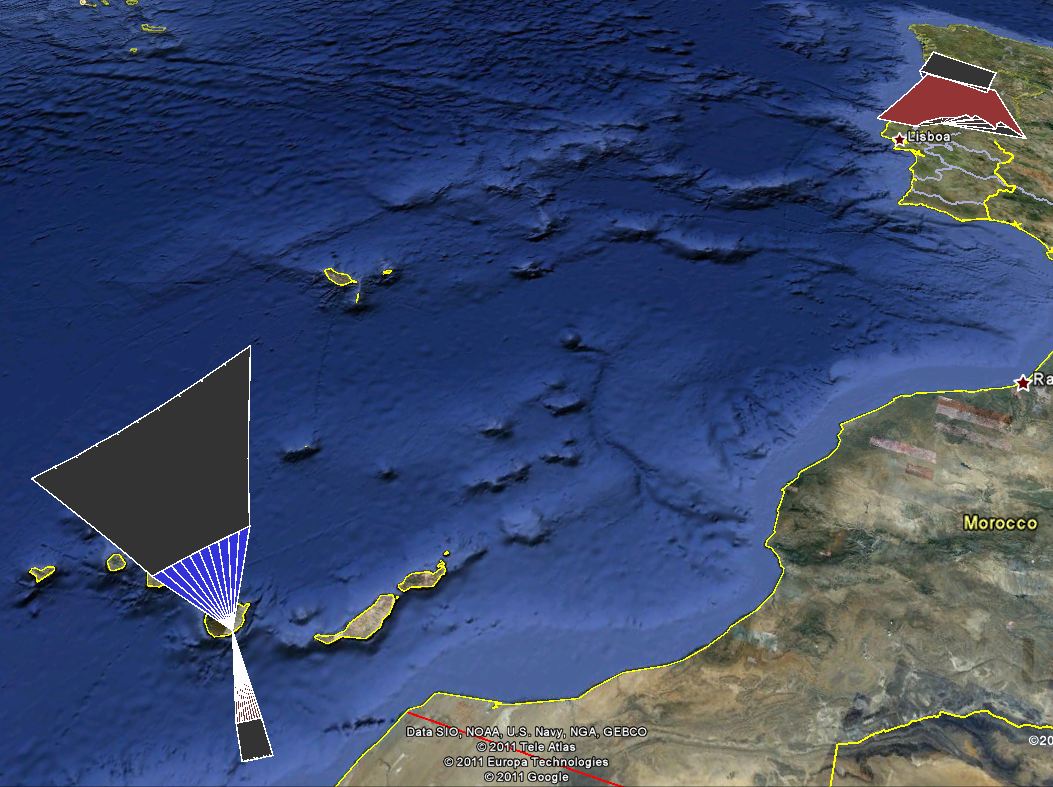 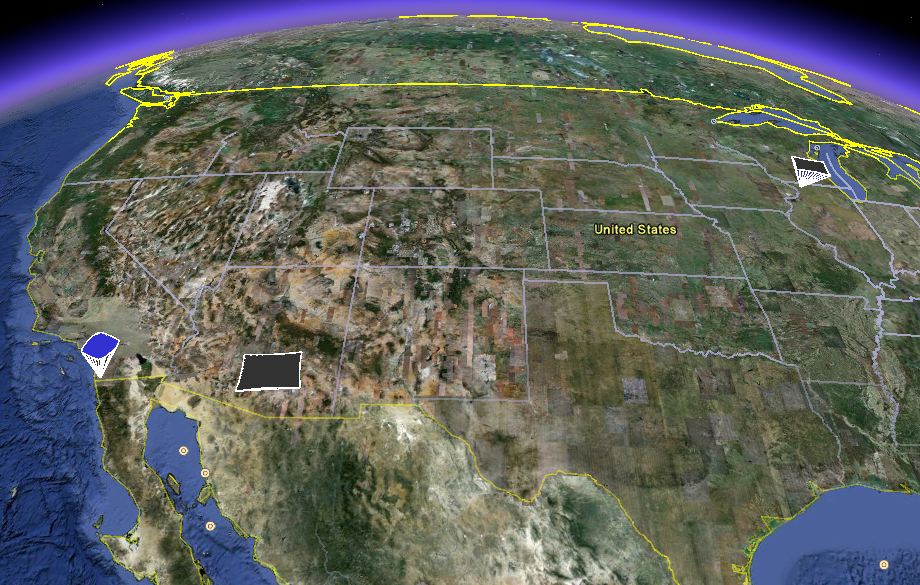 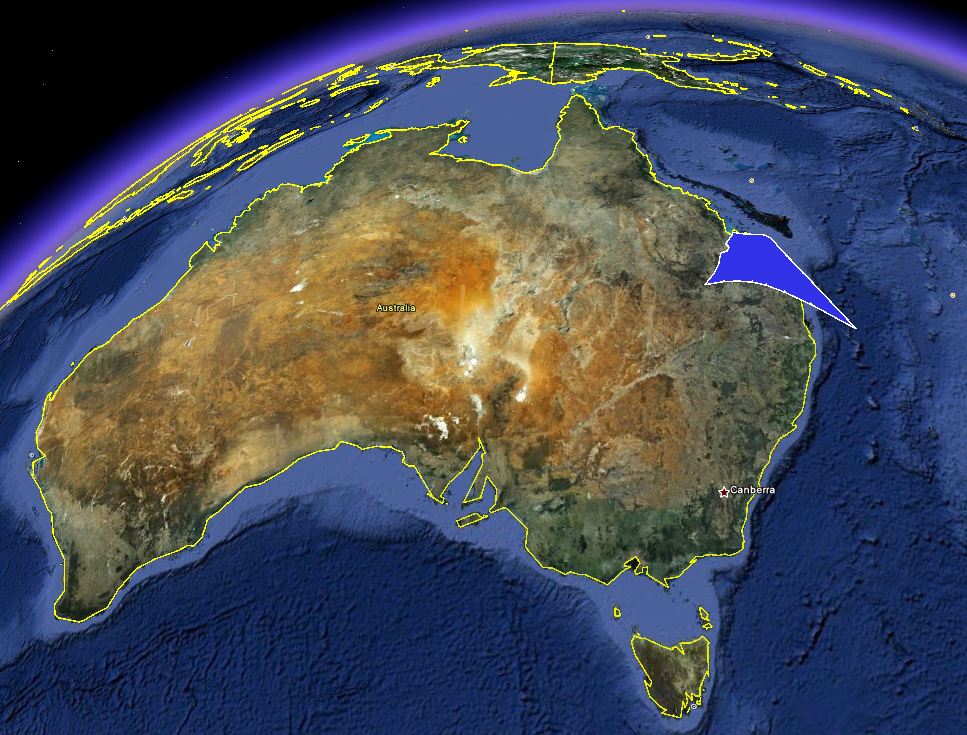 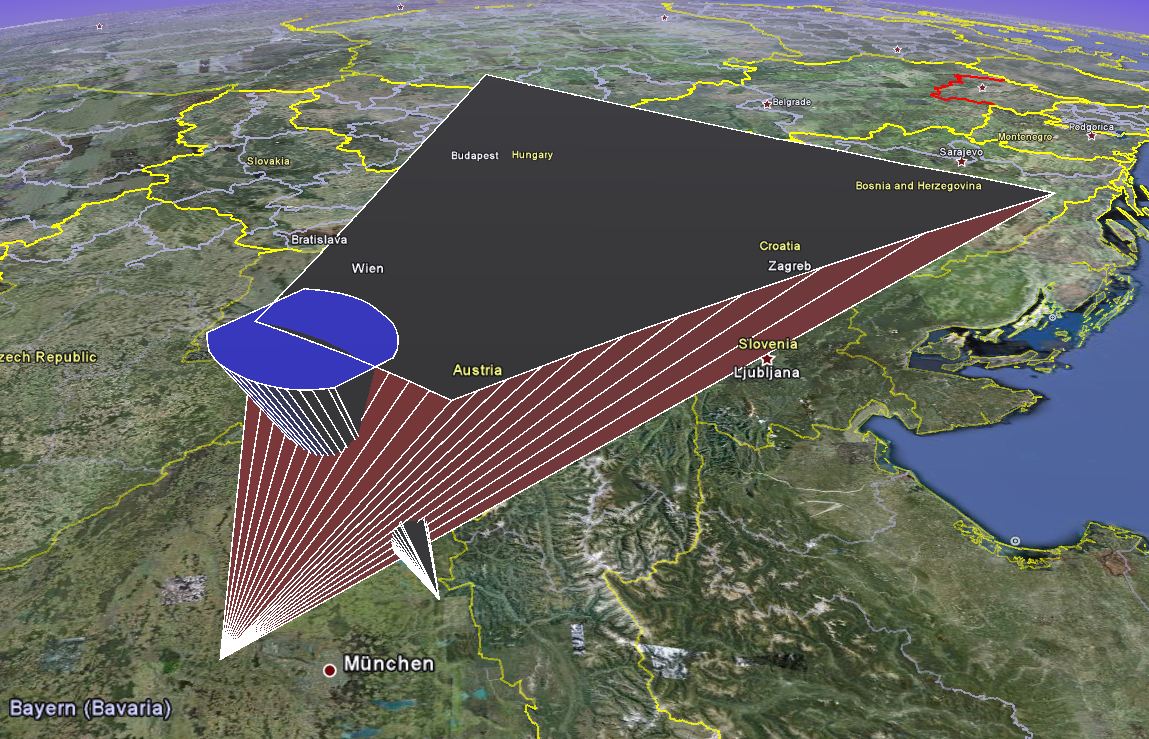 MetRec computes flux densities for all observed meteor shower. Most members of the IMO network upload their flux data soon after the observation to the VMO server, where the results are analysed in real-time and online flux profiles similar to the IMO quick-look meteor shower analysis are presented.

A new version of the MetRec Flux Viewer, which is much faster and allows also for multi-year analyses, has be created in August 2013. It can be reached at http://meteorflux.org.

Monthly Reports of the Video Network

Each month, a report with statistics of recent observations and preliminary analysis results is published both in digital form and as an article in the IMO journal WGN.

All data marked with an asterisk (*) are available online in IMO's PosDat format.

All additional data like detected stars and limiting magnitude information, the effective collection area and the flux density of the observed meteor showers as well as the configuration and logfiles of each observation are stored in an MetRec-internal format. The complete database of >6 Mio files and >350 GB is stored on USB hard drives and can be obtained from the author.

Note that the IMO Video Meteor Database is exported regularly to the EDMOND database, where it is used together with other data source to calculate high quality meteoroid orbits from chance double-station observations (mainly) in Europe. More than 80.000 orbits have been derived meanwhile.

The video meteor database has been utilized for the analysis of individual meteor showers (e.g. the Taurids) and the update of the whole IMO Working List of Meteor Showers in 2006. In order to demonstrate and unveil the full value of the database, MetRec was supplemented by two new tools: RadFind and StrmFind.

Using these tools, a first automatic meteor shower search based on nearly 200,000 single station meteor records was carried out in 2005/2006. The results were presented at the 2006 IMC in Roden/NL. Not only 24 showers of the current IMO Working List were detected, but also 4 sporadic sources as well as a number of unknown meteor showers and shower candidates that are not yet part of the list.

In 2008, the analysis was repeated with an improved algorithm and a dataset that had almost doubled with 360,000 single station meteors. It was presented at the 2008 IMC in Sachtica, Slovakia. In the first step, the active radiants at each solar longitude were recomputed, and from these the list of meteor showers was created using the same algorithm as in 2006.

For the 10th anniversary of the IMO Video Meteor Network in 2009, another comprehensive analysis based on 450,000 meteors has been carried out and published in WGN. In addition to the automated analysis, the result were manually refined this time. More than 50 meteor showers from the IAU Meteor Data Center (MDC) Working List were confirmed, and 12 new showers were detected. For each shower, we presented detailed parameters including activity profiles, and we presented findings about a velocity drift of certain long-lasting showers. As an example, two radiant plots are presented below. They compare very well with similar plots of the SonotaCo network.

In the course of 2011, we recorded the one millionth meteor in the IMO network. So the analysis was repeated in May 2012 based on 1,060,000 meteors obtained between between January 1993 and December 2011. The radiants were determined for each solar longitude interval, and made available online for meteor shower analyses. From these radiants, a list of possible meteor shower has been automatically generated. This list was manually checked in refined in the monthly reports of the IMO Video Meteor Network in 2012 and 2013. In the end, 101 showers could be detected. The analysis was completed by manually checking all showers of the MDC working list for traces in the IMO Video Meteor Database. By this, another 28 meteor shower from the MDC list were confirmed. The results were presented at the IMC 2013 in Poznan including the table of all confirmed showers and a few additional shower candidates.
The XLS spreadsheet that allows to easily compary the MDC list with radiants found in the IMO database and to test any other meteor shower hypothesis, is available here. It has been extended to now also obtain the CMOR meteor shower list as of 2012.

Plot of individual radiants from the 2009 analysis over all solar longitudes in right ascension (x) and declination (y). Each dot represent a radiant made of between 10 and 10,000 meteors. The velocity is color coded, and the strength of the radiant (meteor number) by the intensity

The same plot as above, but in Sun-centered ecliptical coordinates with Antihelion point in the center.

There are a number of errors that typically occur in every day operation of a video system. The common errors page has a number of answers to those questions that you always liked to asked but never dared to. ;-)

Among the hundreds of thousand video meteors recorded by members of the IMO network, there are some unusual, fascinating and spectacular samples. A selection of these was used to create a screen saver (30 MB ZIP file), which comes in two version: with and without sound

There is a mailing list announcements in the IMO-Network. You can subscribe/unsubscribe to that list and browse the list archive at https://groups.io/g/imo-network/topics. Observations of the IMO Network are quality-checked by skilled MetRec users. They can be reached at imo-network-admin@groups.io.